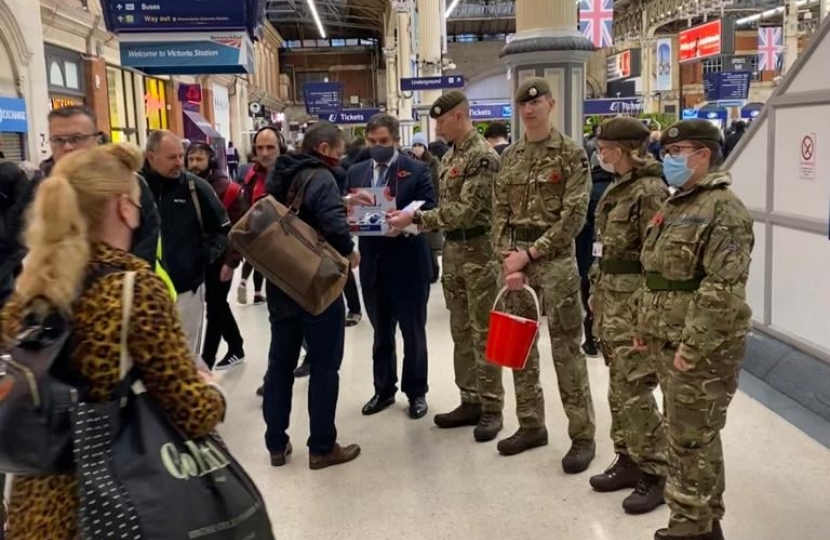 Last week I joined Army personnel selling poppies to commuters arriving at Victoria Station - including many from Horsham.  It was great to see how many had already donated to the Royal British Legion, their poppies a visible manifestation of our support of those who have suffered in conflict and their dependents.

It’s 100 years since poppies first became our official symbol of remembrance.  Their existence owes much to the poem written in 1915 by the Canadian Army Doctor Lieutenant-Colonel John McCrae.  He was inspired to write it after presiding over the funeral of his friend Lieutenant Alexis Helmer, killed at Ypres.

In Flanders Fields, the poppies blow
Between the crosses, row on row,
That mark our place; and in the sky
The larks, still bravely singing, fly
Scarce heard amid the guns below.

Having initially (but only temporarily) been embraced in America they were introduced into the U.K. and Commonwealth after the War’s end and were first widely circulated (completely selling out) in England in 1922.   To ensure future supplies the Poppy Factory was established employing disabled ex-servicemen. Today, the factory in Aylesford continues to produce millions of poppies each year.

The demand for poppies in England continued unabated in the 1920s and was so high that few poppies actually managed to reach Scotland. To address this the 'Lady Haig Poppy Factory' was established in Edinburgh in 1926 to produce poppies exclusively for Scotland.

Today, over five million Scottish poppies (which have four petals and no leaf unlike poppies in the rest of the UK) are still made by hand by disabled ex-Servicemen at Lady Haig's Poppy Factory.

Early this week I visited Athens, the British Sovereign Bases on Cyprus and the Government of the a republic of Cyprus.  Commonwealth War Cemeteries in Greece and across the Aegean are haunting reminders of past conflicts.

Even as we remember the sacrifices of past conflicts the Royal Air Force continues to take off from Akrotiri daily on missions to preserve and enforce peace in the Middle East and in support of NATO Allies in the Black Sea and Mediterranean.

I also visited British troops wearing the blue berets of the United Nations helping to maintain peace along the buffer zone across the island.

Horsham’s commemoration of Remembrance is always poignant, both the short event on Armistice Day – 11th November - and Remembrance Sunday itself.  Even though sadly my duties as a Defence Minister are likely to prevent me attending the latter this year I am so glad that the commemoration is returning with plans afoot to ensure every aspect of the traditional ceremony returns in 2022.