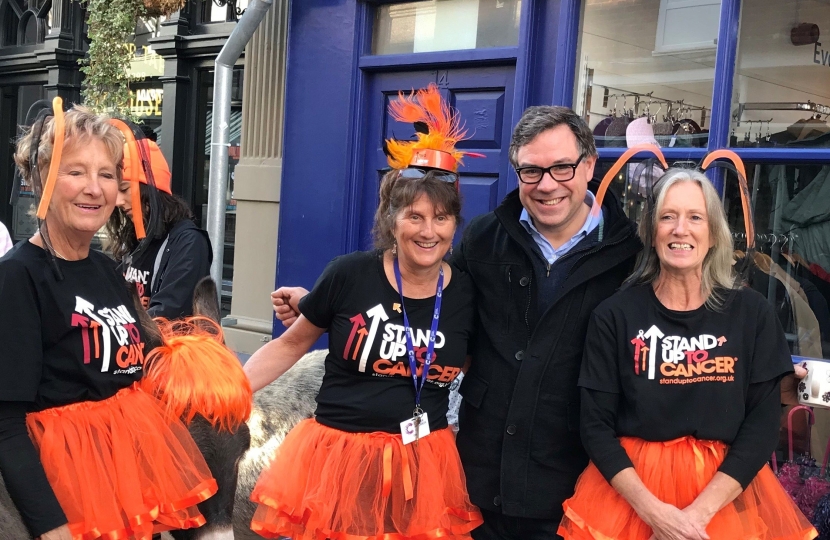 I greatly enjoyed attending the opening of the Bridge Leisure Centre at Broadbridge Heath on Friday.  It’s a fabulous facility which I am certain will be very well used by our growing population.  There is a host of evidence from Park runs to burgeoning sports teams that local people want the opportunity to take part in sport and “active leisure” and this is another great opportunity.  Not only do residents enjoy it – exercise has well publicised health benefits including helping to reduce the risk of many cancers.

Raising awareness and fundraising were both on the agenda for the Cancer Research UK charity shop on East Street on Saturday when they held a Stand Up 2 Cancer ‘Donkey Funday’ event. The team were joined by donkeys Louie and Dolly who were a huge centre of attention and helped to raise over £500.

The money will be well spent - Cancer Research UK has helped to save millions of lives by pioneering work to prevent, diagnose and treat cancer.  All profits from the fund raising from the event will fund ground breaking research that takes potential treatments out of laboratories and into clinical trials.  The charity employs over 4,000 doctors, scientists and nurses throughout the UK: including 3 scientists at Brighton Hospital who are working on ways to prevent cells becoming cancerous through their research into DNA.

Cancer survival rates are one of the great triumphs of recent decades:  five-year survival rates for women with breast cancer have risen from only 53% in the 1970s to approaching 90 %.  Likewise, five-year survival rates for bowel cancer have also doubled to 59%, up from just 24% in the 1970s.  Improving cancer survival rates continues to be a major priority and research whether it is commercial or funded by the public or charitable sectors (more often working in tandem) is the key.  Over £882 million in Government funding has also been spent on cancer research across the UK since 2010. Today, 1 in 2 people survive cancer. Cancer Research UK’s ambition is to accelerate progress so that 3 in 4 people will survive cancer within the next 20 years.  Every bit helps.