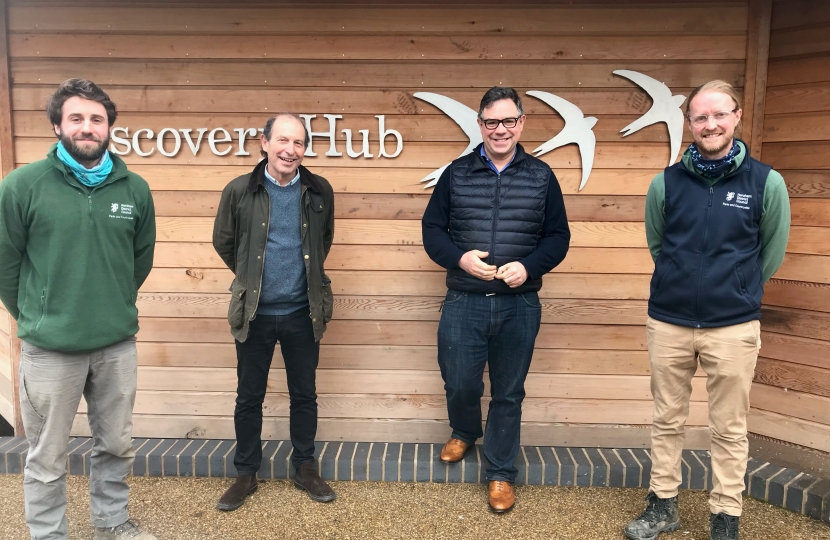 I was delighted to meet Jake, the HDC Countryside Ecology Manager alongside Cllr Roger Noel at the Warnham Nature Reserve this week to see the reserve’s brand new Discovery Hub and Hide which was open for visitors in October 2021. The educational animated Hub has hi-tech interactive activities for children and adults. The views from the Hub overlooking pond are simply beautiful with a clear view of some of the 3,500 species the reserve has recorded on the 90 acre site.

The Millpond is home to many wetland birds such as Coot, Pochard, Tufted Duck and Great Crested Grebe. Kingfishers are seen throughout the year with the peak occurring in July/August. There is also a thriving Grey Heron colony which averages at 15-20 breeding pairs each year.

The reserve has been recognised for its biodiversity programme by the Sussex Wildlife Trust and has been rated 3rd out of the whole of the County for recorded species. Jake and his team also have responsibility for all the HDC sites including Leechpool and Owlbeech Woods, Chesworth Farm and Southwater Country Park with plans in place to enhance biodiversity.

The reserve has seen its best breeding season last year and reports seeing double the amount of visitors to 44,000 this year from 20,000 on average in previous years.  The reserve also welcomes schools and is a great location for children to learn about wildlife and nature.

The reserve is helping lead the way on the Government’s new local nature recovery plan which was announced last week by the Environment Secretary. It is very welcome that the Government is using the UKs COP26 and G7 presidencies to take a leading role on driving global green recovery.

The Government announced plans last week on its drive to boost biodiversity on a National basis, using Nature Recovery Networks to create areas which are richer in wildlife, more resilient to climate change and provide wide environmental benefits, including carbon capture.

Clearly locally the Knepp Estate is another fantastic example of Horsham leading the way in this area turning over 3,500 acres of farmed land to projects to help create a mix of habitats and support land restoration.

The core role of British Farming remains providing food for the U.K. and export but the new package of policies announced by Government will help us to deliver our ambitious biodiversity targets.  Our clear objective is to ensure that our generation bequeaths a more stable, secure and bio-diverse environment to those that follow – this is a hugely demanding but exciting prospect.

I am regularly contacted by constituents concerned about the future of our planet and our environment.