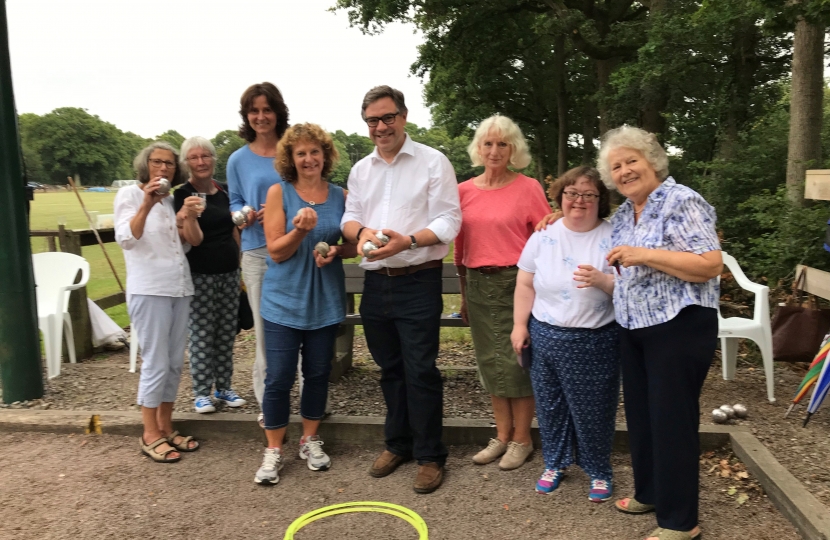 Parliament “rose” on Thursday for the Summer Recess which for MPs is a wonderful opportunity to escape fully the Westminster bubble and immerse themselves in the constituency. This week for me has involved a wide variety of constituency events, surgeries in locations from Broadbridge Heath and Billingshurst to Copthorne and Kilnwood Vale and “Meet your MP” pub events from Rudgwick to Ardingly.

Boris Johnson has engendered a great sense of purpose over the last week. I think most, whatever their stance on the Referendum, want the issue resolved and for us to get on with the many other issues we need to address. The Prime Minister’s focus on these issues alongside resolving the EU debate is I believe widely welcomed.

In re-forming the Government the Prime Minister has appointed me to serve in a more senior capacity in the Whips’ Office as “Comptroller of Her Majesty’s Household”.

The position was first held in 1399 and is derived from the medieval Household office of Controller of the Wardrobe! The duties accompanying the title have, fortunately, changed since and in practice it means that I will serve as “No.3” in the Whips Office alongside the Chief and Deputy Chief Whip. This is a demanding role at the best of times but absolutely critical given the current parliamentary arithmetic.

Unusually for a Whip (who do not generally speak in the chamber except on matters of parliamentary procedure) I was also delighted last week to make my debut performance at the dispatch box (speaking as a Minister). This was replying to the debate on “Matters to be brought up before the Adjournment” - replying to MPs who in this debate can raise any local or national issue and require a response! The debate has been described as a “lucky dip” on the basis that the Minister responding does not know what MPs will raise and any subject under the sun can come up! However as is often the case these general debates often reveal common cause between MPs across the political spectrum and Thursday’s had a positive atmosphere. In responding I was able to mention issues that have strong resonance in the Horsham constituency – including school funding, concerns on UC raised with me by the Horsham Food Bank and Citizens Advice, both of which do so much good locally, and also the battle against human trafficking raised by our local charity “Streetlight.

As a “Whip” my main task is to help ensure Parliamentary business is properly conducted in the Chamber and in Legislative Committees (often working with the Speaker’s team and Opposition whips). I also act as an interface between Conservative MPs and the Government.