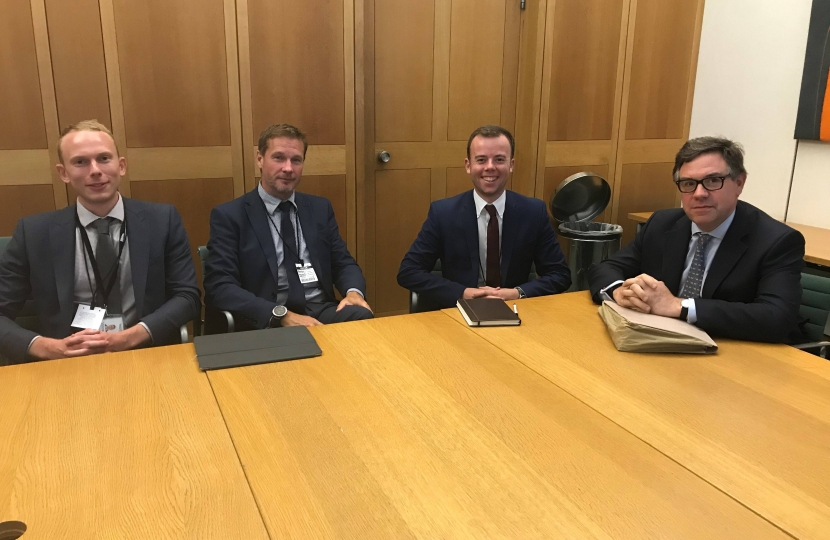 Following the concerns raised earlier on this year about safety at level crossings, I arranged to meet representatives from Network Rail in Parliament on this issue.  This is the second meeting I have had with the team in the last year.

While both residents who had, this year, raised specific concerns about the Barns Green Crossing were satisfied that all was well having reviewed the CCTV footage I wanted to ensure I was up to speed with the timings associated with these crossings, how these are determined, and future plans.

I was joined by John Halsall, Regional Managing Director for Network Rail and the Route Level Crossings Manager for the South East Route.

I thought it might be helpful, given concerns raised, to go through the explanation I was given on how the (Automatic Half Barriers - AHB) level crossings work.

-The sequence is initiated by a train detector (the location and distance that this detector is positioned away from the crossing is dependent on the line speed through the crossing);
-Once this happens the amber lights are activated for 3 seconds;
-This then changes to red lights for 5 seconds (8 seconds cumulative);
-The barriers then begin to lower;
-At around 15 seconds since the yellow lights were activated, the barriers will be fully lowered;
-A train could then pass through the crossing 27 seconds after the yellow lights are initiated.

A minimum of 27 seconds warning time has to be provided between the amber light starting to illuminate and the train arriving at the level crossing.

This timing is stipulated by the Office of Rail and Road within their document Railway Safety Publication Number 7 “Level Crossings: A Guide for Managers, Designers and Operators”.

I was concerned that 27 seconds doesn’t seem a long enough period (although this is “in theory”, in practice  one recognises that sitting in a car for 27 seconds can seem much longer that it sounds).  This time period has, I was assured, been determined as the safest timing for all level crossing users (trains, cars, pedestrians etc) after considerable work and evaluation. The timings are tightly controlled, as it has to be ensured there is enough time for the train to pass safely through the level crossing but it also has to be ensured that barriers are not down for an excessive amount of time, which could encourage misuse.  The safety experts believe 27 seconds strikes the right balance and they also believe evidence supports this conclusion.

Clearly depending on the straightness of the track and the distance between stations the regulated speed of trains can vary.  The sequence of the level crossing does factor this in through the positioning of the detectors. If at any stage the connection is lost between the detector and the barriers the barriers will drop and will remain down until the incident is investigated and the detector reconnected.

I raised the differences between a full barrier and an AHB level crossing. They explained that the idea behind a half barrier is that it gives an escape route, should a user be on the level crossing when the barriers come down

Full barriers are monitored by a signaller watching the level crossing from CCTV footage of the crossing. They can therefore see if there is a user stuck on the level crossing and act accordingly.  These barriers stay down for longer and thereby create longer delays for road users – they do however have a particularly important role in urban/suburban areas where there is constant foot and vehicular traffic.

Network Rail have installed yellow cameras on a number of AHBs across the region (I visited one of these on its installation in Horsham).  It is hoped that these cameras act as an effective deterrent, reducing the risk of misuse. Their installation can cost in excess of £3million per level crossing and is a significant undertaking but if they prevent just one incident on the 44 AHBs in our region that is money well spent.

Network Rail are looking into new technologies that could further improve AHBs. One possible option is having the normal half barriers with the skirting, but having opposite them a barrier without skirting, similar to those used at car parks. Obstacle Detectors would then scan the crossing and if it is not clear the barrier without the skirting would remain up to provide an escape route.

Obstacle Detectors may also be used on full barriers and the signal will only be given to the train if the scanners detect that the crossing is clear. A signaller will still operate and monitor the crossing due to the lack of escape route.

We can therefore expect to see further improvements to safety – improvements which will be necessary as both our rail lines and the roads that cross them become busier in the years to come.

As ever I would encourage residents who witness a possible issue with a level crossing to report this immediately to Network Rail using the yellow emergency phones located near the level crossing.

However if residents wish me to raise any specific concerns regarding level crossings with Network Rail, so please do contact me with specific details (location, date, time etc).