Local Firms Doing Their Bit for the NHS 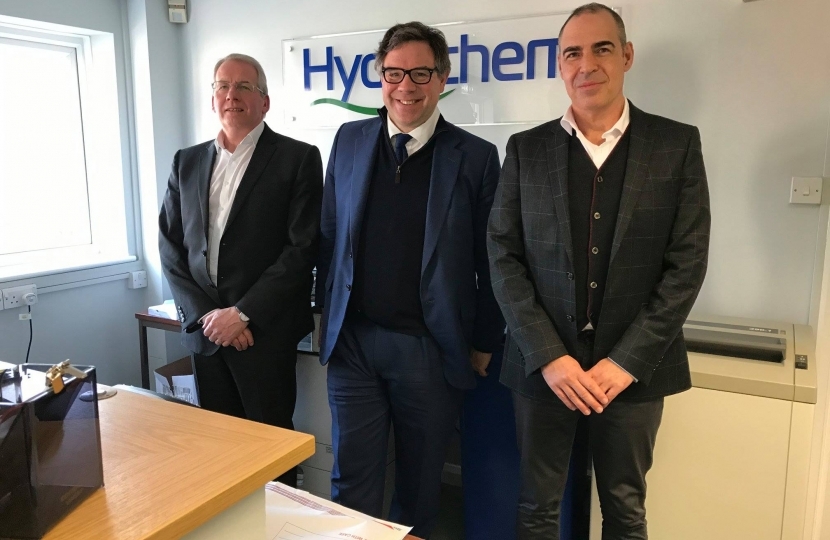 Last week, Captain Tom Moore, with an honour guard from his old regiment, completed his challenge to walk 100 lengths of his garden before reaching his 100th birthday. In doing so he has raised a staggering amount of money for the NHS – some £20m.

On completing his challenge Captain Tom said “for all those people who are finding it difficult at the moment: the sun will shine on you again and the clouds will go away”.

Support for the NHS is coming from all quarters.

This includes local businesses who are critically important suppliers to the NHS: one such is the Billingshurst based company, Hydrachem.

I was fortunate to visit Hydrachem last year to learn about their role as one of the world’s leading producers of Chlorine tablets, including for hospital disinfection.

Hydrachem is a vital supplier of these disinfectants which are critical to keep surfaces and equipment clean. They are currently supplying around 95% of the disinfection tablets used by the NHS, absorbing extra cost to ensure timely production and delivery across the service.

One of the problems they encountered early on was that Southern Rail, anticipating the 90% reduction in passengers as a result of lockdown, established a revised timetable with fewer services to ensure reliability for keyworkers. Unfortunately the timetable make it harder for the dedicated team of key workers at Hydrachem to do their job.

I am delighted that having put Hydrachem and Southern in contact the rail operator immediately grasped the seriousness of the situation. The timetable was revised in order to help Hydrachem maintain its vital work.

At a time when there is a lot of anxiety and concern it is great to be able to share a positive story of a local firm and its employees really stepping up to help our NHS and local infrastructure being able to be flexible in supporting the national effort.

There is still a long way to go and all of us maintaining our lock-downs remains hugely important but there is positive evidence that rate of infection is flattening:  this is the genuine glimmer of light at the end of what is for everyone a very dark tunnel.

Testing and Support for the NHS

We agree with the WHO that testing is critical.

The UK has tested more people than almost any other major economy outside of China, South Korea and Italy.

We are increasing our testing capabilities yet further.