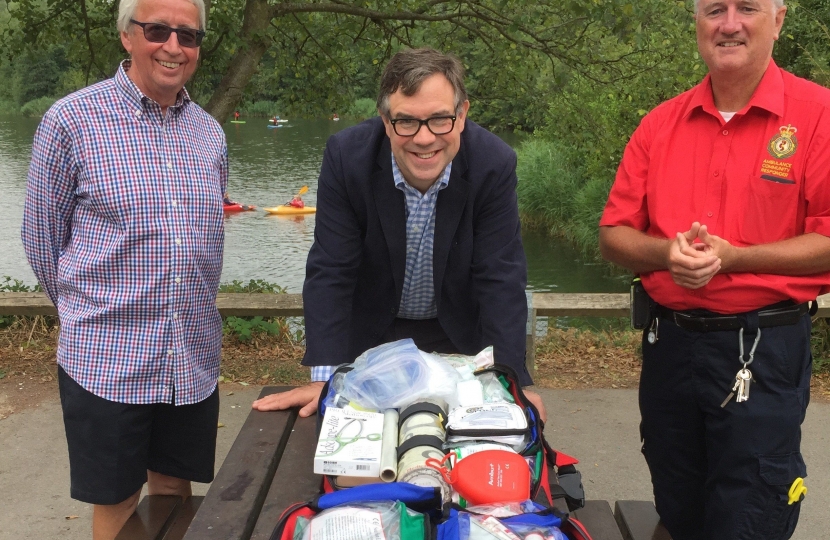 It was great to see all three Cadet Corps represented at Horsham’s “Armed Forces Sunday” (and I was pleased to give the event a mention in Commons’ Defence Questions!)

Last weekend I saw another of our cadet organisations when visiting the St John Ambulance Cadets at their Summer Camp at Warnham Park.

One of the young people attending has already been at the scene of a Road Traffic incident and was able to put his training into use.

Clearly one of the main focuses of first aid is what to do after someone has a heart attack: CPR is a core response that saves thousands.

We should all be grateful to local volunteers who are operating from workplaces and homes throughout our community as “First Responders”. Fully trained, they “log on” with the Ambulance Service when they are available to help and can be called out to those in need in the critical moments before an Ambulance reaches the scene.

I seem to see Horsham First Responders “on duty” at events at least once every weekend! They are highly visible and, alongside other local First Responder groups, run training and are always keen to hear from potential new recruits.

The kit they encourage, which is increasingly prevalent around the District, are “Defibrillators”. These come with “talking” instructions. They can be deployed by anyone and improve the chances of saving a life through CPR by 20 per cent.

I recently visited, with the Horsham team, a new “defib” in Blatchford Road (put up by Pentagon Plastics) and this week I met the Southwater First Responders when visiting the Defibrillator at the Country Park.

Finally many thanks to the team behind “Joseph and the Amazing Technicolour Dreamcoat” put on last week by Forest with the support of Millais. In heat not conducive to wearing any coat, let alone the amazing, multi –colour variety, the audience loved the students’ brilliant performance. Those attending included the retiring Headteacher, Siobhan Denning, who will be much missed. She has keenly supported Music during her time at the school and the tremendous results last week (and the confidence and professionalism of the students) are a tribute to all involved.

Photo caption: With Southwater Community Responders at the Country Park - and the kit used by the volunteers in emergency.