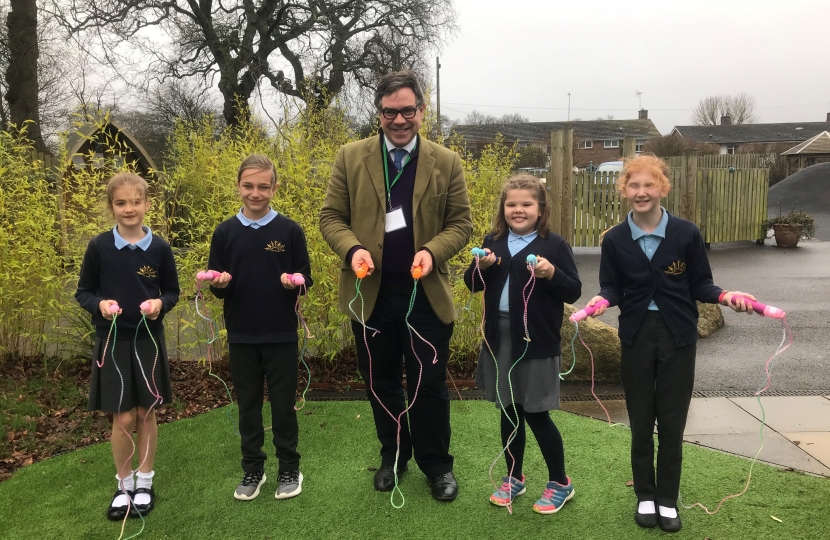 Friday, 31st January was an historic day. The United Kingdom has left the EU.

The EU is embarked on “ever closer Union”. A different path lies ahead of us, one based on a close, friendly but independent relationship with the EU and new stronger relationships with other partners around the world.

This significant moment in our country’s long history was (understandably) lost on the younger pupils of Holy Trinity School, Lower Beeding who I visited “on the day”. They were more immediately focussed on Friday’s “fish and chips” and on the school’s (clever) adoption of new-style skipping ropes which record every “skip” undertaken. (Against all warnings I did give it a go, which made little impact on the automatic recorder but an ongoing and rather painful impact on my knees….)

The youngest children in reception are the same age as I was when we joined the “EEC”. What will the next decades hold for them?

We have a habit of assuming things are only likely to get worse, despite this being contrary to most human experience throughout history. Over the last 50 years we have become overall wealthier, less socially and economically divided, longer-lived, better educated, more widely travelled and healthier.

Overseas, trade has driven up living standards throughout the (rapidly) “emerging” world. Dreadful events happen both natural and man made but global communications mean we are more aware (and able to help) than ever before. 1970s East Germany went to huge efforts to stop its citizens receiving Western TV to prevent them knowing on what they were missing out – states still try the same trick but the spread of the internet makes it harder.

Our society and economy has moved from dependence on heavy industry to services. Change will continue to be driven by technology. Drivers will include the vital need to find technological solutions alongside conservation and environmental answers to climate change (everything from carbon storage to battery powered aircraft).

The expectations of the new generation and the needs of those currently in work require faster economic growth – moving ours towards global levels from the sclerotic increases which have been the recent European norm. For the UK to prosper we will need to be more not less international – willing and able to take our rightly envied technological and scientific success and the entrepreneurial spirit that (notwithstanding Brexit) brought one third of all European tech investment to the UK last year – with confidence into the future. We must do so without any reduction in the standards which underpin our society – from workers rights to environmental protection.

Over 50 years changes in our industries and markets have focussed economic productivity away from our historic industrial heartlands and the Atlantic facing ports of Glasgow and Liverpool towards our London services global-power house and the South Eastern “gateway to Europe”. I hope that investment and focus will level up opportunity throughout the country and in doing so reduce the constant pressure on our much loved but hotly sought-after patch of England.

We have a golden opportunity and must never forget that it is the futures of today’s primary school children that we are forging.