On Patrol with the Cadets! 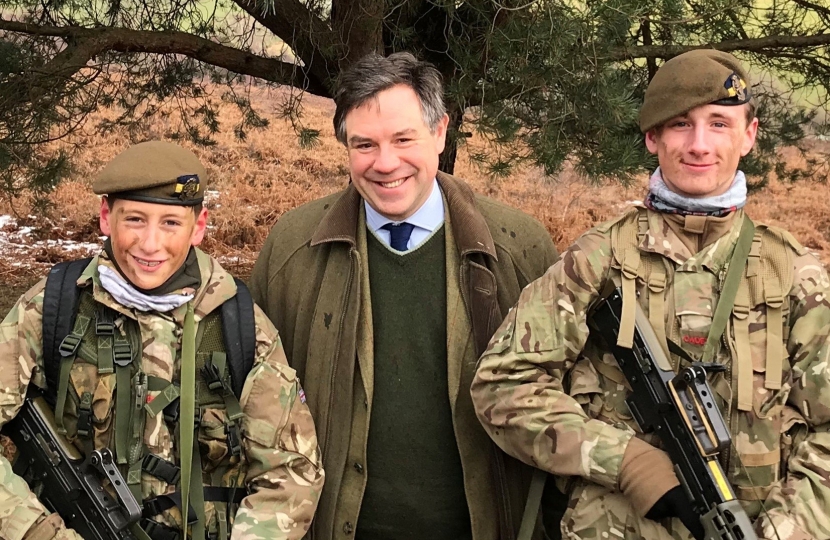 It was a great pleasure to visit the Horsham Army Cadet Force on their recent training camp in Crowborough. The camp gives Cadets the opportunity to practice their skills in fieldcraft whilst meeting Cadets from other detachments throughout the County.

I really enjoyed meeting the Cadets, who were clearly having a great time notwithstanding a scattering of snow! Some were being briefed on “compo rations” – which have definitely improved!   It was also a pleasure to meet the instructors who clearly enjoy working with these keen and enthusiastic youngsters.

In Horsham we are fortunate to have Army, Sea and Air Cadets who are a great asset to Horsham and regularly seen in town including on Armed Forces Sunday and for the Remembrance Day commemoration.

Becoming a Cadet provides a great experience for young people, allowing them to build their confidence and resilience whilst gaining practical skills, such as first aid. Cadets can also work towards awards and qualifications, such as the Duke of Edinburgh’s Award or a BTEC First Diploma in Public Services.

The Cadets also learn military skills:  there is no expectation for Cadets to go on and join the armed forces but it does provide an insight into the opportunities they can provide while also building the confidence invaluable in any career.

I know from comments I have received how many local people enjoyed being a Cadet when they were younger. It is clear from those comments that being a Cadet helped them develop their leadership skills and gain experience either before going into the armed services or into a whole variety of other careers.

I would encourage anyone who may be interested in either becoming a Horsham Army Cadet or who wishes to find out further information to the Army Cadet website. This can be found at https://armycadets.com/county/sussex-acf/.  It is also worth pointing out that the Cadet forces only thrive due to the support of adult instructors who thoroughly enjoy working with the Cadets in their charge: for those who enjoyed the Cadets themselves or are sorry they missed out – there is still an opportunity to get involved!