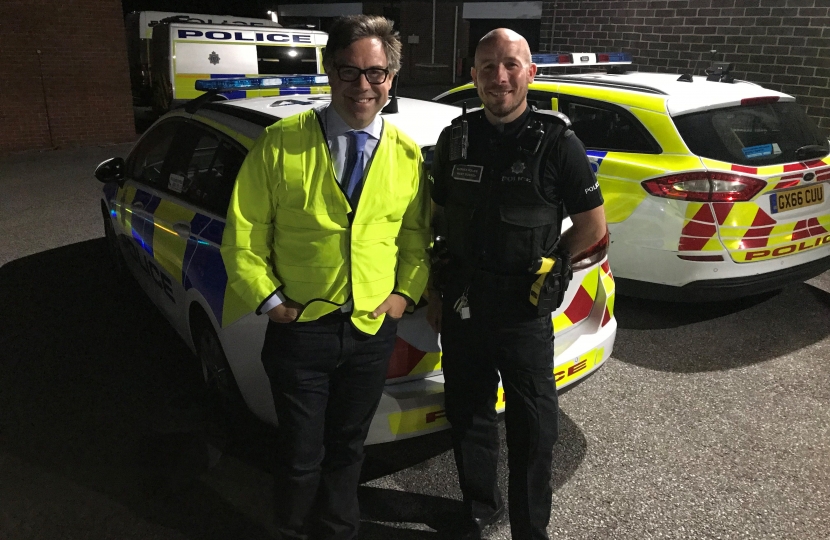 I spent much of Thursday with the rapid response units based at Horsham police station. I left enormously impressed with the professionalism of the officers concerned and their camaraderie and mutual support.

I was totally supportive of our Police and Crime Commissioner, Katy Bourne, increasing our local police precept, a view reinforced by seeing the local police in action.

Of course this was only a snapshot of one area of policing but it was still an eye-opener as to how the service is evolving. A lot of time has to be devoted to internet related offences. This may include children being groomed or internet/telephone scams which these days are far more likely to deprive a pensioner of their hard earned savings than a burglary. Likewise domestic incidents take up a significant proportion of police time: incidents which in the past may not have been drawn to their attention or in which they may even have been reluctant to get involved. No one would now doubt the vital role of police in both areas. However both types of crime take police away from being visible on the streets into dealing with often difficult but essential police work.

The PCSOs (with whom I also caught up) have an invaluable role, not only on our streets but, through community engagement, providing an edge to crime fighting. On which point: the police need our help and if you see something suspicious please do report it. A simple email to Sussex Police (www.sussex.police.uk) really helps – and not just as a one-off – the more information (especially if a pattern emerges) the better.

If a member of the public sees the same individual acting suspiciously in the same place regularly this builds up vital intelligence.

I am most grateful to Sussex Police for giving me a fascinating insight. The questions it raised for me are around the support we give them: how do we respond to repeat offenders especially when they are driven by a drug addiction, the officers to whom I spoke are supportive of the “YOS” approach to young offenders but I am keen to learn more about how we stop them developing into a life of crime and how else we can use modern technology to support the police in their critical role.

Photo caption: At Horsham police station last week with an officer from the response teams covering the district.