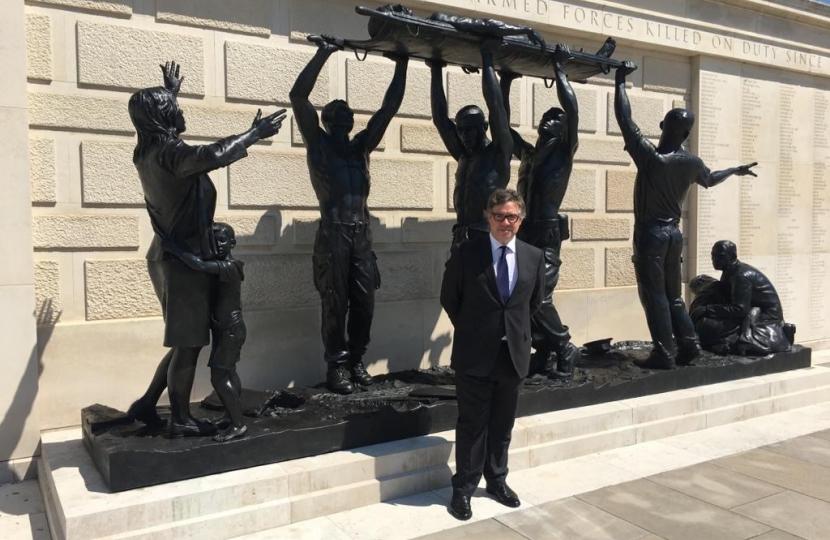 Last Thursday marked the 70th Anniversary of the start of the Korean War - the last involving tens of thousands of British national servicemen.  I was privileged to take part in the commemorations at the National Arboretum in Staffordshire alongside the South Korean Ambassador.  I was touched to hear the Embassy has been providing practical support to the (now elderly)  British veterans of the conflict and their widows through Covid.  They also maintain strong links with the City of Gloucester in ongoing thanks for the actions of the Gloucestershire Regiment who famously held back overwhelming numbers of Chinese Forces at the Battle of Imjin River, securing vital time for the allies.

The National Arboretum is a peaceful and moving living monument to those who have died in the armed forces since 1945.  With 30,000 trees set over 150 acres it is well worth a visit.

I returned to discover from emails the difficulties being faced by Kingslea and Heron Way schools in the their plans to return more pupils to a classroom environment from this week.

I am hugely keen, as are the majority of parents, for all pupils to be back in school as safely and quickly as possible.

Notwithstanding, as we know from recent experience, that students are at ongoing risk of catching Covid there is a huge amount that can and is being done to prevent transmission at school.

I have no doubt that Kingslea and Heron Way, who have won praise during lockdown, will have taken the utmost care with their safety environment. I have great sympathy with their desire to get more children back into school, if only for a very short period, before the end of terms.

I raised the issue immediately with the Department for Education, making the point that we needed a rapid and definitive answer, which I got.

While everyone appreciates the proposals are based on the best of intentions the Education Department wants provision to be extended to other year groups only when full time provision is being offered to all Reception, Year 1 and 6 pupils and vulnerable/key worker children. This is to maximise classroom time for the very youngest children, who are least familiar with the classroom learning environment and often find home-learning most difficult, in order to secure the educational foundations for their primary school experience. Year 6 are also prioritised to help them in their critical transition year. The policy is based on educational and scientific advice and Public Health England also much prefer to reduce large scale rotas of pupils coming in and out of school – notwithstanding the extensive safety preparations envisaged.

I appreciate the widespread frustration of staff and parents, many of whom are unable even to have all Reception, Year 1 and Year 6 pupils back part time.  There is a huge focus of getting schools back nationally as soon as possible though given ongoing levels of Covid in the UK and the way the dreadful virus continues to accelerate globally this does require really careful planning and execution.

Photo Credit: Jeremy Quin at the central monument at the National Arboretum last week where commutations were held to mark the 70th Anniversary of the start of the Korean War.

The best and the worst of human behaviours was on display in Horsham over the weekend.