Remembrance in a Time of Covid 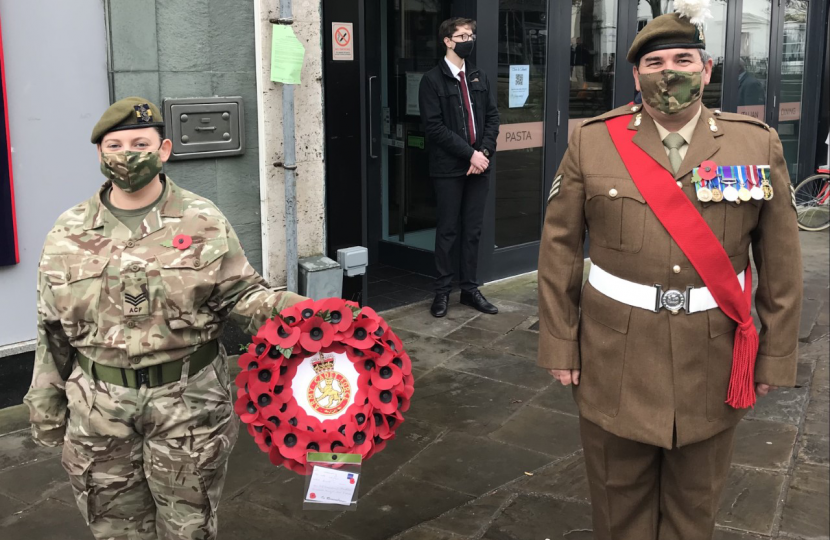 This year marks the 100th Anniversary of the Cenotaph and the burial of the Unknown Warrior, as the inscription reads, “among the Kings” in Westminster Abbey.  I have a prized family photograph of my great-grandfather, a Vicar, sadly surrounded by the parents, wives and children of those killed in the Great War, at the unveiling of his parishes’ memorial at what must have been a similar date.

For 100 years that parish, like Horsham, will have had a Remembrance Sunday service and may even, like Horsham, have a parade – no longer primarily consisting of those who fought in the great wars of the last century but those engaged in subsequent conflicts and young cadets remembering the legacy of freedom secured by those who sacrificed so much.

Remembrance in Carfax this year was very different, no parade, no service at St Marys and, above all (quite rightly in the circumstances) neither the crowds of (literally) thousands, nor the sprinkling of those for whom the fight for national survival is a personal memory.

It may have been different but it was no less sombre nor sincere and  I know the thoughts of so many across our town and county will have been on the sacrifices made as they “remembered at home”.

As a Defence Minister this season has a special impact as I am all too aware of the daily endeavours made by our armed forces.  Operations are being conducted as I write around the  globe by the Royal Navy; soldiers are distant from their families in a multitude of locations from the Baltic cold of Estonia where I visited them last month, to the  heat of the Middle East; the sadly all too regular scrambling of the RAF’s  “Quick Reaction” teams to guard our airspace.

The Armed Forces are also hard at work here at home.  I was privileged to spend an hour today (Tuesday) setting out in the House of Commons how our Armed Forces are continuing to assist on a whole variety of Covid-related tasks – including working closely with the City Council and local NHS on the mass testing pilot in Liverpool.

We have had positive news this week on the vaccines.  However this is still early days.  The independent regulator will scrutinise carefully the safety case when this is published.  If all goes well the logistics of providing the vaccines (which the Government acted early to secure) will be a major task but a task on which the NHS and the Government as a whole is deeply focussed.

Photo Credit: The wreath layer on behalf of the Horsham Army Cadets was among the reduced (due to Covid) attendees at this year’s Remembrance Sunday commemoration led by the Bishop of Horsham in Carfax.

Further to my post of 14th January I wanted to pass on specific reassurance that I have been provided by Royal Mail in the light of the postal delays in Horsham.