A Thank You To Dame Vera 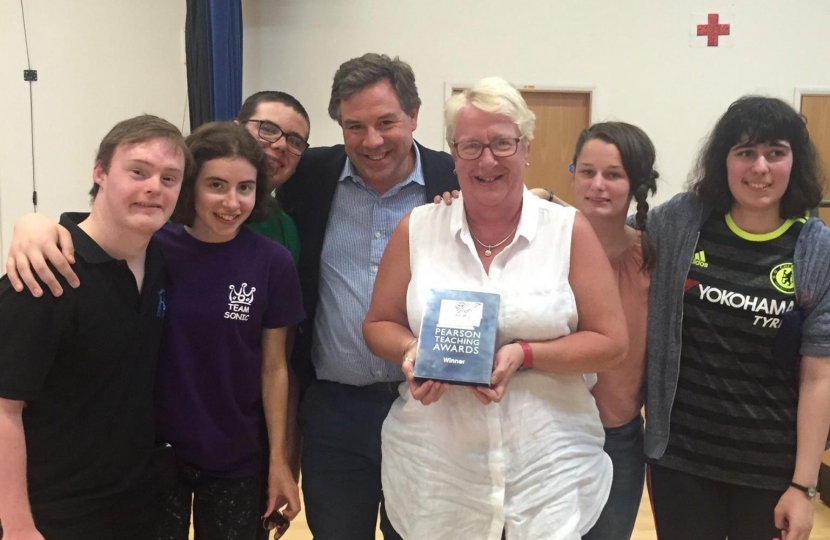 I hope readers managed to see the Spitfires of the Battle of Britain Flight pass over Southwater last week on their way to make their final tribute to Dame Vera Lynn.  She made such a huge impact on morale at a difficult time and remained firmly entrenched in peoples’ over the generations that followed. During the war the BBC initially (on Churchill’s urging) banned “sentimental” songs from the radio in preference to more upbeat and “rousing” musical numbers for those working in the factories or training for combat - until wiser voices prevailed, unleashing many of the tracts that were most popular and have become the staples for the background music to memories of that time.

Dame Vera’s service to the country and county was not confined to the airwaves.

One of my first visits as MP, almost exactly five years ago, was to the Dame Vera Lynn Trust for Children with Cerebral Palsy then based at Five Oaks.

The charity has since moved (though not far) and in a follow up visit last year.  I was pleased to find it continues its excellent role of working with families to educate young children with motor learning difficulties.  Most parents have no idea that their child will be born with Cerebral Palsy.  For many it leaves them not knowing “how to be the family we want to be”.

This is where the Trust steps in:  parents and children learn daily living skills at the Trust’s “School for Parents” using the principles of conductive education.  They support families with babies and children under five years of age – the “Golden Years” in which a huge amount can be achieved to secure a good quality of life for the child.

Helping children who need extra support is so important and I was delighted to read this week of proposals to expand the Queen Elizabeth II Sliver Jubilee School.  The school and its dedicated staff do a wonderful job, including brilliantly staged drama productions, but with student numbers having grown from 85 to 105 it needs more space.  I am so pleased that West Sussex County Council is allocating funds for the school to expand via a three class modular block, if plans are approved, by September 2021.

Also planned to arrive by the same time is a new school in Pease Pottage.  It was good to visit the site on Friday and hear about the work which is just getting underway.  The area has good schools - but it is critical that as new housing is built infrastructure is put in place to ensure demand continues to be met for high quality local education.  This school will benefit by providing a home for Warninglid School from day one - meaning it will be opening with cohorts throughout the school. I very much look forward to seeing it completed!

Photo Credit: Jeremy Quin visiting QEII Silver Jubilee School on a previous occasion for a special assembly to mark the schools national recognition for its drama and music.