Free Trade Deal with the EU 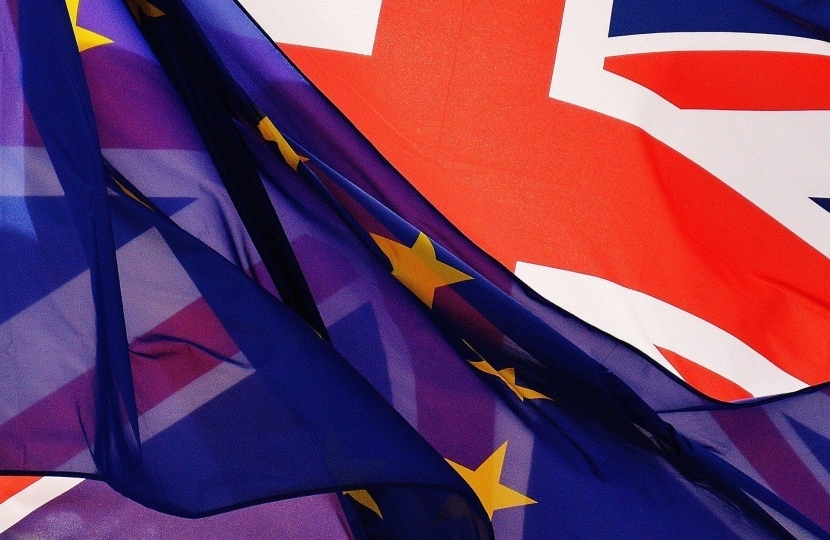 Parliament has voted to approve the Free Trade Deal with the EU.

It was an incredibly important step and one which I supported.

The Referendum and the debate that preceded and followed it have cast a shadow over UK politics and our relationship with our nearest neighbours for too long.

In 2015 Parliament voted to trust the people in a Referendum.  I believe Parliament had a duty to deliver on the result.

This meant returning sovereignty to the United Kingdom and allowing us final control over our money, borders, waters and laws.

After a long and agonising period which has dominated Parliament for nearly four years, that resolution has been achieved.  The United Kingdom has left the European Union and, as of 31st December, will have left the transition period that followed.

The UK’s relationship with the EU over the last 50 years will exercise historians for many years to come.

The EU was established out of the wreckage of the Second World War.  It was founded on noble principles.  The EU, with its determination to bring countries of the continent of Europe together and preserve peace and democracy can certainly act as a great source for good.

However at its heart, and underpinning a single European market, lies a drawing together of countries into political union.

This was a concept which never rested easily with the United Kingdom.  From our entry our focus has always been on trade: the agenda establishing political institutions and legal authority has never excited widespread support.  Indeed, for many, their support for the “Remain” cause in the Referendum was based on the commitment secured by David Cameron that the UK would continue to enjoy economic benefits while not be drawn still further into political union.

This was not a happy marriage.  The UK for too long was seen across Europe as reluctant, even obstructionist, as other nations sought to strengthen central European Union institutions and control.

This Deal allows both parties to move on as friends.

The Deal struck is remarkable and groundbreaking.  Notwithstanding the UK re-establishing its full sovereignty, reasserting independent control of many aspects of national life, resuming our seat at the WTO and being able to strike independent trade deals and once again act as an independent coastal state, we have maintained wide access to the European single market.

The Deal is not only (at over £660bn) the largest free trade deal the EU has ever undertaken it is the first that allows tariff and quota free access to the single market.  For exporters there is new form-filling required (just as there is in other global markets which form the majority of UK trade).  In the immediate term companies will need to get used to the new processes but I am confident that this will soon be established.

Rather than the UK having to agree to follow the EU in implementing rules and regulations made by them, a route incompatible with the Referendum, we have agreed a process whereby both partners can work together.  If either party (EU or UK) believes the other is unfairly and inappropriately undercutting the other that complaint can be raised with an independent third-party arbitration body. This is envisaged to be a rare and exceptional process.

The Treaty covers collaboration in fields of science and technology.  It also covers security which, from a practical operational perspective, should allow continuing close working relationships between both parties in the mutual interest of their citizens.

As with every international agreement you never get everything you would like.  The deal agreed is already, for the EU, groundbreaking.  For full and unfettered access via this Treaty to be provided to all services immediately would have an extraordinary significant further step.

A route is provided through the Treaty for enhanced access to be secured via equivalence regimes.  The European Union, its corporations and indeed Governments, benefit from access to UK professional services and in particular UK financial services and the depth of liquidity provided in the international financial markets hosted in the UK.

I believe the positive outcome of the Free Trade discussion provides a very strong basis for further arrangements to be agreed across these sectors.

In financial services in particular the UK is a global leader:  to quote one of a great many examples more Renminbi are traded through London than any market outside China.  We have all the ingredients to continue to succeed, bolstered by greater scope for more effective and flexible regulation.

For the last two decades our total exports to non-EU markets have been growing faster than those to the EU, with good reason.

Asia’s Regional Comprehensive Economic Partnership now covers 30 per cent of world GDP, Africa’s Continental Free Trade Area will be established in 2021 boasting 1.2bn customers, South America’s Mercosur covers 300m.  These are markets which will be among the success stories of this century and where growth is fastest.

The UK has signed trade deals with nearly 60 countries already:  there are huge opportunities for us to strengthen our trading links.  We must seize new found freedoms to maximise those opportunities globally.

That should in no way diminish our strong and vital relationship with our European friends.  As the Prime Minister put it in the Commons the UK should be to the EU its “best friend and ally”.  In my experience our European friends and allies want us to be just that.  We have too much in common (and we have too many common threats) for there to be any other approach.  It is my sincere hope that we can now move on from our often fractious relationship with the EU as a member to a deeply positive mutually beneficial relationship as leading trading partner, leading ally in the defence of Europe and leading friend on the world stage.