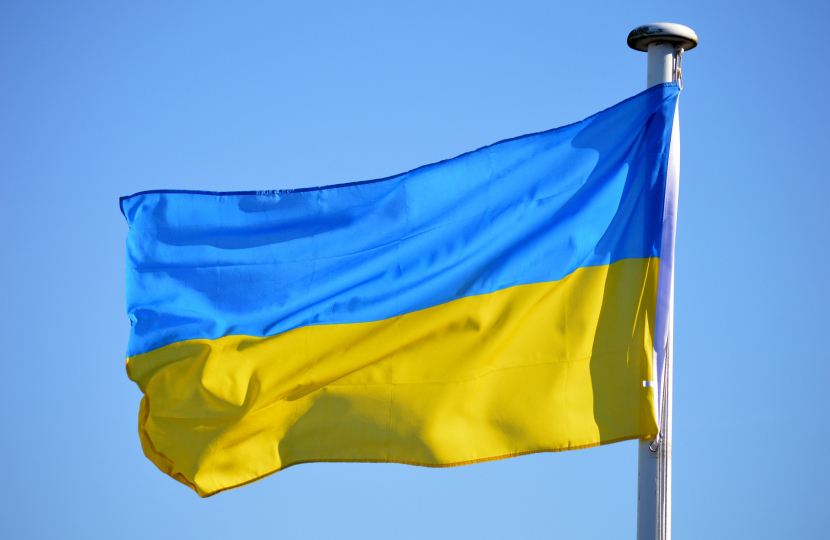 I am aware of a number of Ukrainian citizens who are now based in Horsham and receiving tremendous support from our local communities.

I know from my contact with the Ukrainian Government how appreciative they are for the support we are providing.  I hosted my Ukrainian Ministerial opposite number in the U.K. recently and saw how moved he was by the display of support on so many shops and houses for the Ukrainian people.  They are very grateful for all the support the U.K. is providing - including to their fellow citizens currently seeking refuge in the U.K.

I am aware of over two dozen ongoing visa applications from constituents. My team and I have been in daily contact with the Home Office. The vast majority, but not all, of applicants are no longer in Ukraine and are now seeking their next move to the UK. My office has been assured that application processing Is happening and I have seen visas being granted. The aspiration is to ensure that visa applications are processed over 48 hours, we are still a long way from meeting that ambition but I sincerely hope the surge in resources will reduce processing times even though there is an on-going increase in applications.

I will continue to make representations on behalf of constituents who are taking part in the Homes for Ukraine scheme. However for understandable reasons the Home Office have asked MPs to be cognisant of the fact they are triaging applications to prioritise the most vulnerable.

How Constituents Can Support the People of Ukraine

We all feel the plight of the people of Ukraine desperately.  The idea that a "war of choice", the unprovoked invasion of one country by another could happen in Europe in the 21st century with all the carnage and suffering that unleashes seems unimaginable.

I have twice visited Ukraine on behalf of the Government including attending their National 30th Anniversary celebrations last summer.  I was deeply impressed by President Zelensky but also by many of the Ukrainians I met who were so proud of their long history and their independent future. The defiance, courage and patriotism of President Zelensky and the people of Ukraine in the face of the barbarity being thrown against them is inspiring.

We advocated the central bank and SWIFT sanctions which, operating in lockstep with so many other countries around the world, are having a deep and devastating impact on the Russian economy with analysts predicting a double digit percentage economic contraction as the rouble collapses, the stock market remains suspended and interest rates hit 20 per cent. This and other sanctions will overtime have a significant impact on the Russian war machine which is causing such horror.  We have to date sanctioned over 800 individuals and entities including freezing over £250bn of bank assets.

We are the largest bilateral donor of humanitarian aid to Ukraine and its neighbours and have at readiness 1,000 troops to support the countries bordering Ukraine in providing humanitarian support as required.

To Make a Financial Donation:

The following charities are organising financial collections for the people of Ukraine:

The Ukrainian Family Scheme allows family members of British nationals, UK settled persons and certain others to come or stay in the UK. Those joining the Scheme will be granted leave for three years and will be able to work and access public funds. The Scheme is also free and does not include any salary or language requirements.

Ukrainians already in the UK can either extend their visa or switch to another immigration route, where eligible, even if their visa does not normally allow them to do so. Guidance on the support available to Ukrainian nationals and their family members can be found here: https://www.gov.uk/guidance/support-for-family-members-of-british-natio…

The Government has also announced the Homes for Ukraine Scheme. More information about the scheme can be found here: https://homesforukraine.campaign.gov.uk/

Jeremy Quin MP invited Hosts of Ukrainian Refugees living in the Horsham constituency to join him on Saturday (19th November) for a meeting.

Mr Quin took the opportunity to thank the Hosts for all they are doing in providing support to their guests.

Meeting with Hosts of Ukrainian Refugees

**THIS MEETING IS NOW FULLY BOOKED**

If you have any issues you would like to raise with Jeremy regarding the Homes for Ukraine Scheme then please do email him on jeremy.quin.mp@parliament.uk

A number of households in the Horsham constituency have very kindly taken in Ukrainian refugees through the Homes for Ukraine scheme.

Jeremy Quin Opens Debate on the Situation in Ukraine

I opened the debate on Wednesday for the Government on the situation in Ukraine. A long clip I am afraid as I thought it important to take all of the "interventions" raised in the House on both sides. However I hope it gives a fair view of the U.K.

Last week I visited the Horsham Refugee Support Group at one of their regular meetings. They have been doing incredibly valuable work since 2015 and it was good to speak to them about what they have been doing.

On Friday I popped into the Horsham Refugee Support Group drop-in session at the London Road Methodist Church. The drop-in sessions held on a Monday (at the Christian Life Centre) and a Friday 10-12 are for Ukrainians arriving to the area and their hosts.

Jeremy Quin MP, Minister of State in the Ministry of Defence commented on the Kremlin's sanctions announcement:

Trying to See Light Through the Brutality of War

We endlessly hope that mankind can leave depraved brutality behind.  We are sadly proved wrong, equally endlessly.  We all fear the atrocities committed in Bucha are no “one off” and that similar actions will be discovered across occupied Ukraine.

Since its launch, over 150,000 people have registered to become sponsors through the Homes for Ukraine Scheme. I am delighted that so many people have signed up to provide accommodation and support to those fleeing the awful war in Ukraine.